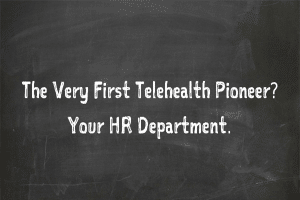 Over decades the practice of using technology to allow a doctor treat a patient in a different location has plodded along, from pilot to pilot, and grant to grant, all the while on the fringe of healthcare.

Half a century has passed since video teleconferencing was first used in Boston to connect a doctor with a patient in a different facility. Interestingly, while telemedicine has been a favorite pet project of neurologists and widely used by radiologists, a different flag bearer has lead telehealth’s rather swift march from fringe to mainstream in just the past couple of years.

Healthcare spending represents a huge swath of the American GDP. Nearly 1-in-5 of all dollars spent in the U.S. is on healthcare. Many businesses profit from healthcare spending. Medical devices, pharmaceuticals, care delivery, and insurance are all huge industries that benefit from spending.

Ultimately, though, one group has long held the bill: employers. It’s not surprising, then, that an opportunity to immediately address two of healthcare’s biggest challenges (cost and access) appealed to the very group that largely funds the healthcare industry.

So, while telemedicine – also called telehealth – has been looking for a champion in the healthcare industry for decades, it’s the folks on the other side of the cost equation who are finally – and rapidly – bringing telehealth to the mainstream. The National Business Group on Health (NBGH) was the latest group to find the rising popularity of telehealth (which was relatively nascent and obscure just a couple of years ago) to be in vogue with employers. NBGH’s survey found that roughly half of all employers will offer their employees telehealth in 2015.

Interestingly, while employers are certainly the catalyst that will push telehealth to the tipping point, it won’t stop there. Because when employers open up their wallets – the industry takes note. In the coming months you’ll see a lot of groups get on the telehealth bandwagon. Don’t be surprised to see local hospitals running ads promoting their new online service, or your insurance card offering $0 co-pay for “online visits” right alongside increasingly expensive PCP and specialist visits.

Make no mistake, telehealth is here. Employees can rejoice, and should thank their HR department for leading the charge.